SUPPORTER
#121
impressive work! this thing will be running in no time.

LIFETIME
SUPPORTER
#122
97TJGUZZY said:
impressive work! this thing will be running in no time.
Click to expand...
I made the cooler lines out of a cheaper (amazon version) of what I'm using for fuel lines. It was good training and they went together pretty easily. On to fuel now.
B

#123
This makes me want to get a project Jeep going.

LIFETIME
SUPPORTER
#124
I planned to get some work done yesterday, but ended up going to buy a bunch of tools and watching the game at Tripp's.

Today we had lunch at church and I got to work after. I made a mount for the power steering reservoir and finished that up while Tripp worked on modifying the ECU mount.

I got a press in fitting to convert the pump to remote res. It's 10AN fittings and 5/8" pushlok hose for the supply. The return is 3/8 line with a 6AN pushlok fitting. 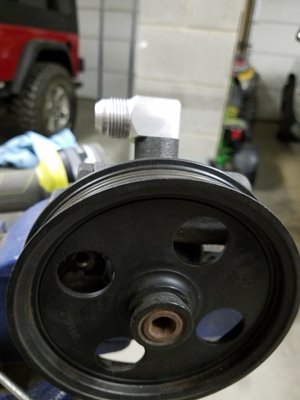 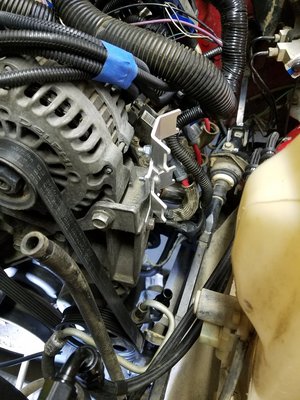 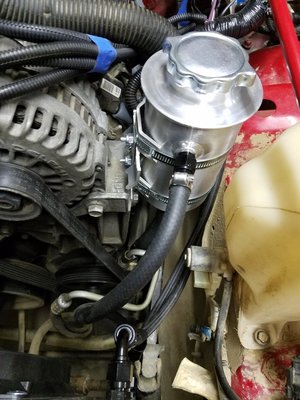 Tripp took the ECU mount I bought, conformed it to the driver's inner fender, and made a mount for the TAC module on top. 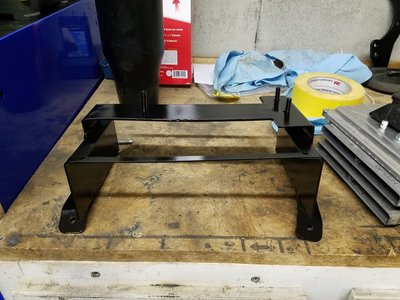 We had to run to the parts store to get hose for the power steering return, so we took the upper radiator hose that didn't fit well and found one from autozone that is much better. 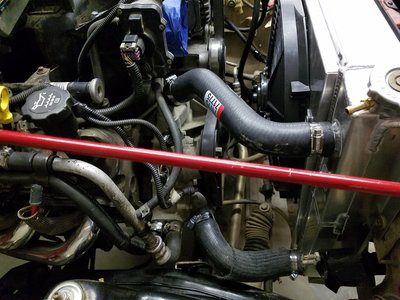 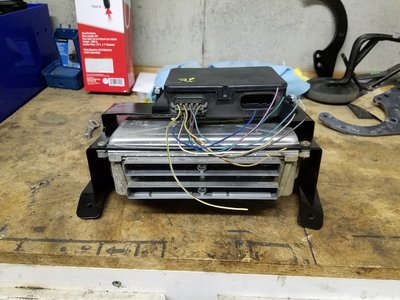 It feels good that the parts pile on the bench is dwindling. The only things left are the fuel lines and exhaust pipes with 02 bungs, which should get done this weekend. There's still a lot of parts on the floor that have to go back on though, and fluids, and of course wiring...
Last edited: Sep 9, 2019

LIFETIME
SUPPORTER
#128
This morning, after a good breakfast, Tripp and I started by mounting the passenger fender so he could keep working on the harness. I went to work on fuel.

I started by mounting a bulkhead fitting in the tank for the return. This jeep has had a 3" body lift at some point in its past. The filler neck was cut and extended with a piece of tube. When it was lowered back to stock prior to me purchasing it, the tube was left alone. I have since lifted it 1", then lifted the fuel tank. The filler was crusty and crimped almost shut, so ordered a replacement. 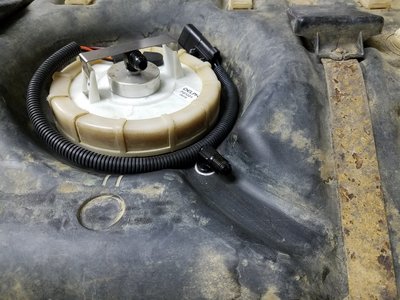 Then I opened up the holes from the factory fuel line clips that used push pins to 3/8" and put in nutserts. I used a clamp meant to mount a light on roll cage tubing to mount the fuel filter, and cable clamps for the line. 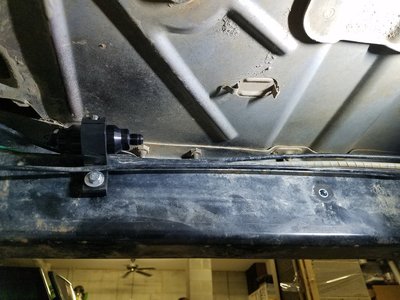 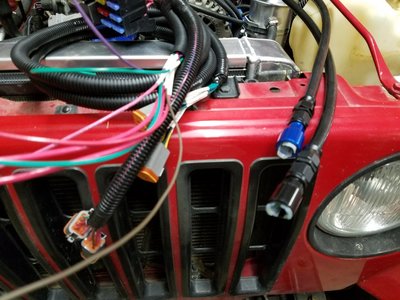 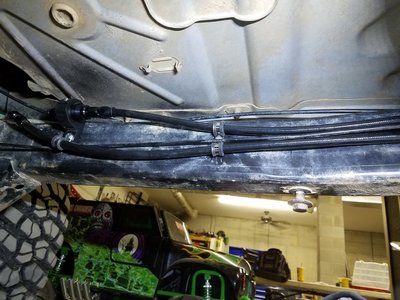 The GM harness was set up to have its fuse block near the ecu, but we ran out of room over there. Tripp built an extension harness to bring it over to the passenger side with the jeep fuse block, and built a bracket to mount it. 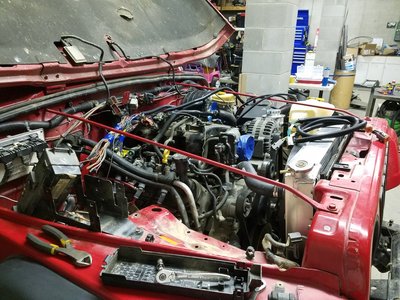 Stopped for the day. The factory Buick air intake looks like it's going to work. 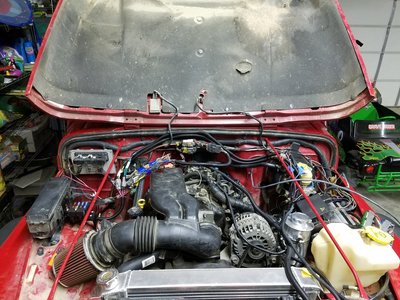 LIFETIME
SUPPORTER
#129
I planned to use the quick connect fuel line adapters in the 3rd picture above. They were in an assortment of fittings I got from somebody on NC4x4. I had one of the 5/16 and 3 or 4 3/8 ones. The 5/16 one I had trouble getting on the rail, but I lubed it and it locked on tight. The first 3/8 one was really loose. I swapped it for another one and it snapped on, but I was still able to pull it off the rail with moderate wiggling and force.

Everything I'm doing fuel related is overkill and I'm not going got skimp here. I just ordered Russell's screw together rail adapters and will swap them out.

LIFETIME
SUPPORTER
#130
Fuel system is done! I started today by swapping the quick connect fuel rail fittings for screw on ones. 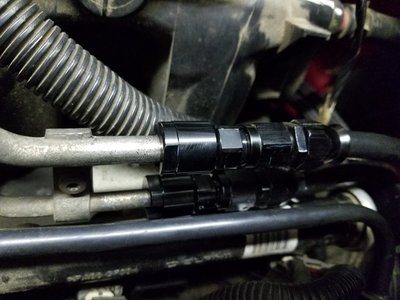 Then I put the tank in, measured for lines, took it out, then in again. New filler neck and venting setup too. 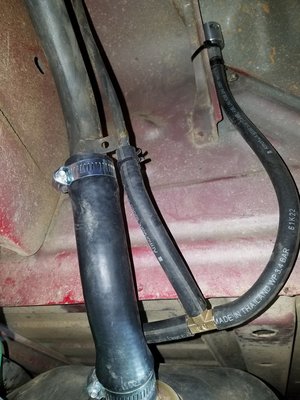 LIFETIME
SUPPORTER
#131
Today I got the collector pipes installed with the O2 sensors, worked on the trans shifter cable routing to keep it off the headers, put atf in the tcase, and bolted all the front end body work back together. 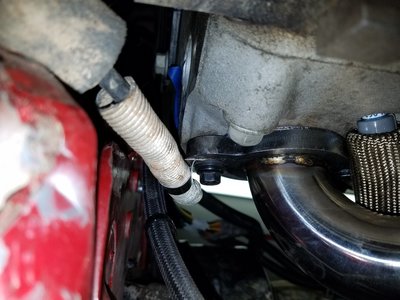 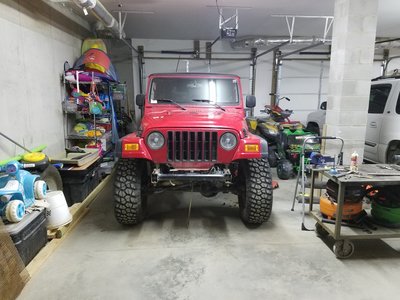 This week I'll get a couple clamps to mount the coolant bottle, and I'll order an air filter. Other than that and bolting in driveshafts, tightening suspension parts we loosened, and fluids it's down to the wiring to make it run and drive.

The parts pile is down to driveshafts, battery, arb compressor, bumper, swaybar and armor. I do need to fix the winch while it's off though. 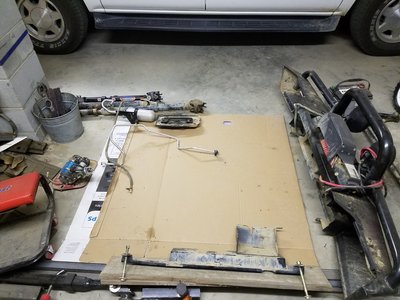 SUPPORTER
#133
I'm so antsy to see this thing work!

LIFETIME
SUPPORTER
#134
It may not stay like this but it will get me up and running with a zip tie to the grill support. I'd like to move the coolant tank elsewhere and do a 90 and a bigger filter tucked in behind the headlight, but this could all get rearranged when I get to AC, so leaving it for now. 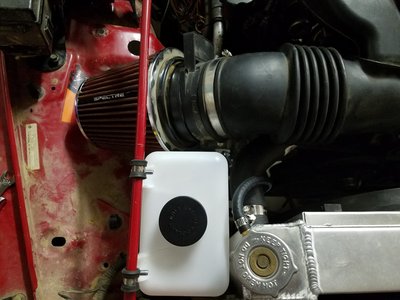 LIFETIME
SUPPORTER
#135
Long day today. Tripp jumped on wiring and I finished some stuff up underneath and routed wires, etc. Tripp's dad came over and made the throttle pedal cable and helped with the rest of the wiring. Richard was here most of the day giving us a hand too. The goal was to have it turn over today.

I was hooking up the starter. Didnt take a picture but it was pretty crusty rusty. Tightening the power wire up, the solenoid plastic just crumbled. So I had to go get a new starter... 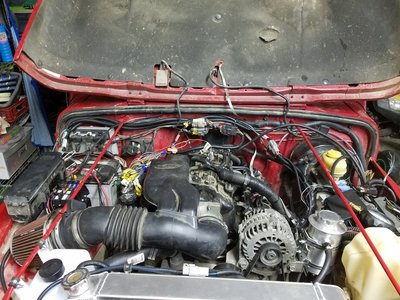 We got everything hooked up and put a manual oil pressure gauge on it. With no fuel in the tank we turned it over until we saw pressure. It was firing on the 2.5 year old fuel vapor in the rails, good sign.


Then we rolled it out the door to put fuel in it. The tank wouldn't take gas, so I'll have to rework my venting. I had capped the 5/8" vent, so I pulled that cap and it took fuel.

Then we primed fuel system, checked for leaks, and fired it up.


It's idling at 300 rpm and not taking throttle input. We did a little research and emailed the tuner and it sounds like it's a TAC/ECM mismatch issue. Waiting on a response if it can be fixed in tune.

It's also dripping water from the thermostat housing, so I'll add that to my list.
Last edited: Sep 29, 2019

LIFETIME
SUPPORTER
#136
Tripp wanted to know hours to this point. I've worked on it for some amount of time on 24 days. Total time is 90.75 hours, estimated man hours 158.
D

LIFETIME
SUPPORTER
#138
I ordered a thermostat for pick up in store yesterday and got it thismorning. Got home and drained water, put the sway bar back on while waiting, and realized they gave me the wrong part. Swapped it out, installed, put some water back in and no more leak.

SUPPORTER
#140
I have tried to document as much as possible in this swap...as it seems their will likely be more of these done in the future... Here is the google doc im using/updating. If you see something that isnt clear, let me know, i will address it.