#1
And got to see what was left of the Auger Hole trail....I feel old. I'll have to wait until the wife unloads her camera for pics.

The steel bridge was only two steel I-beams with no plates when I crossed it several times years ago in my '79 CJ-5. Of course, we also got to the Auger Hole trail from Frozen Creek outside of Rosman, too, back in those days.

Was nice to see it though, and even nicer to drive it again, even if its been almost 20 years. Took my "new to me" 2003 WJ daily driver on it's first gravel road run, bone stock, with stock M+S tires...basically driving with the idea of turning around if anything looked like too much for it, made it all the way to bridge. I don't have skid plates or recovery points yet, so turned back at the bridge, happy with how a bone stock WJ did.

Was impressed with the late model Range Rover coming across the bridge, but those SUV's have so much technology pushing them, I guess it's no big deal.

Did see a small group of three come out, an XJ, a Wrangler, and a Super Duty, as we were parked at the visitor center, and saw an OSCAR t-shirt. Wonder who that was?

Guess I need to order a skid plate for the transfer case, a small lift, and figure out some recovery points for the WJ, it will do fine until the XJ is bolted back together.

SUPPORTER
#2
Looking forward to the pics!


Sent from my iPad using Tapatalk

SUPPORTER
#3
x2! I want to go up there some day. Need a good reliable street rig though.....
D

#4
Well, sadly the pictures are few...my wife did great pics when we were in Colorado and Utah, and even did well with pics when were at the Gulches. This trip, she had her nicer digital SLR, and all the shots of the trail and WJ were blurred. She was experimenting with various manual settings on the camera, so maybe next trip. I only took three pics with my phone, but here they are. I'll try to make up for the lack of pics with explanations of the pics at least. 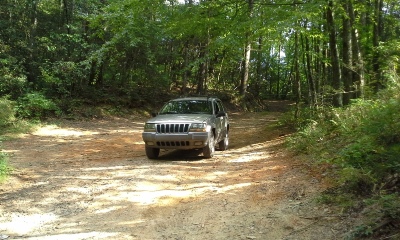 I have not had a Jeep with a NV-242, so I was playing with the 4WD Hi-Full Time since the start of the trail was easy. I should have known it was going to getting more difficult since the sign did clearly state "8 inches of ground clearance required", and the entrance had a paved hump like you might see in Utah or Colorado at trail entrances.....but since I got so entranced with the NV-242, I did not notice my riding of the brakes instead of using Low Range was causing a problem until my wife said "I smell hot brake pads"....oops. So after a downhill that a picture will never do justice, we took a break to let the brakes cool, stretch our legs, etc, which resulted in the above picture. To the left of the WJ was the old route coming from Frozen Creek Rd outside Rosman, NC. 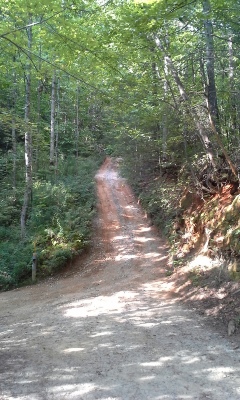 This was the hill we just came down, and like I said, pictures never do a hill justice. Yes, its nothing compared to School Bus Hill at Telico, Imogene Pass, or Hell's Revenge, but it was decent steep for here. At this point, I told my wife we would keep going until I stopped seeing clear signs that mild M+S tires had passed both ways...when we came to the first mud hole where mild treads did not make it out the other side, we were turning back. Besides no recovery points, all my normal "in case we leave pavement" gear was back in the wife's 2003 Explorer, which is not like me. 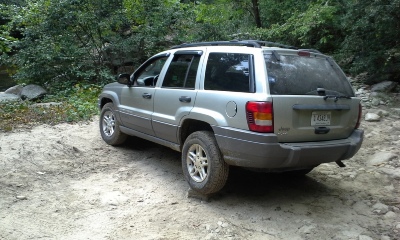 This was at the actual "steel bridge" at the river (of course I don't have a pic), at the time I was still marveling at how well the WJ did on M+S tires, when a late model Range Rover began working it's way back across the steel bridge....despite having a set of well-worn low profile tires, the impeccably dressed Expedition couple operating it drove it well, and made it smoothly across. We checked out the bridge, the extra beams and steel plates on top made it way easier than when a group of college boys in 2 YJ's, 1 I-6 CJ-7 and 1 v-8 CJ-5 stacked rocks to get 31" tires up on the two beams and idle across in 4-Lo.

I believe this video by one of the guys I believe is in the Upstate Cruisers club shows the bridge well as it is now, on what is called Chestnut Mt Road, but I knew this trail as the Auger Hole trail. I broke my first AMC 2-piece axle shaft on this trail, but ran it again when I got the Moser Engineering axle shafts installed in the model 20.

It was fun to find something I last drove on years ago, before the trips to Arizona, Utah, and Colorado. Now I got a few accessories to add to the WJ, and look forward to the day when I can drive the XJ on this.
Last edited: Sep 9, 2016
C

#5
I've been wanting to make that trip for awhile now. Thanks for posting pics. Once I get the Jeepster back together I'll be contemplating a mild snow run up there. I think that'd be a killer adventure
D

#6
Cj104 said:
I've been wanting to make that trip for awhile now. Thanks for posting pics. Once I get the Jeepster back together I'll be contemplating a mild snow run up there. I think that'd be a killer adventure
Click to expand...
I hear you. I'd love to go back and cross the bridge, but not before at least adding a Mopar transfer case skid and some recovery points. Meanwhile, we'll explore what we can in the WJ. We went and checked out Horsepasture Road on the 16th after the seasonal gates opened, and got to the old boat ramp easy enough, then left out down Cane Creek back to Highway 11. Good way to spend the day.
B

#7
I have been up there a half-dozen times and I swear I have no idea where the steel bridge, Frozen Creek road nor Chestnut Mt. Road. Is there another section I don't know about?
D

#8
billoftt said:
I have been up there a half-dozen times and I swear I have no idea where the steel bridge, Frozen Creek road nor Chestnut Mt. Road. Is there another section I don't know about?
Click to expand...
Have you entered by way of the Jocassee Gorges State Park off 281?

Let's just hope everyone cherishes the few places left to go....
B

Typed on a phone where my fingertip spans across three or four keys creating lots of spelling mistakes and grammatical errors.
D

#10
I just scanned that IH8MUD thread, and looks like much of the trail I remember is still there...I'll try to look at my old photos for some pics from 20+ years ago when we ran that trail 1-2 times a year, and I was young and stupid enough to drive on steel I-beams 12" wide.
Here's hoping nothing stupid happens to close it before I get the WJ lifted and armored, or the XJ rolling again....never made it to DurhamTown, or the private place off 11 before they were no more.
B